How to Keep Coyotes Away (Coyote Deterrent & Repellent Options) 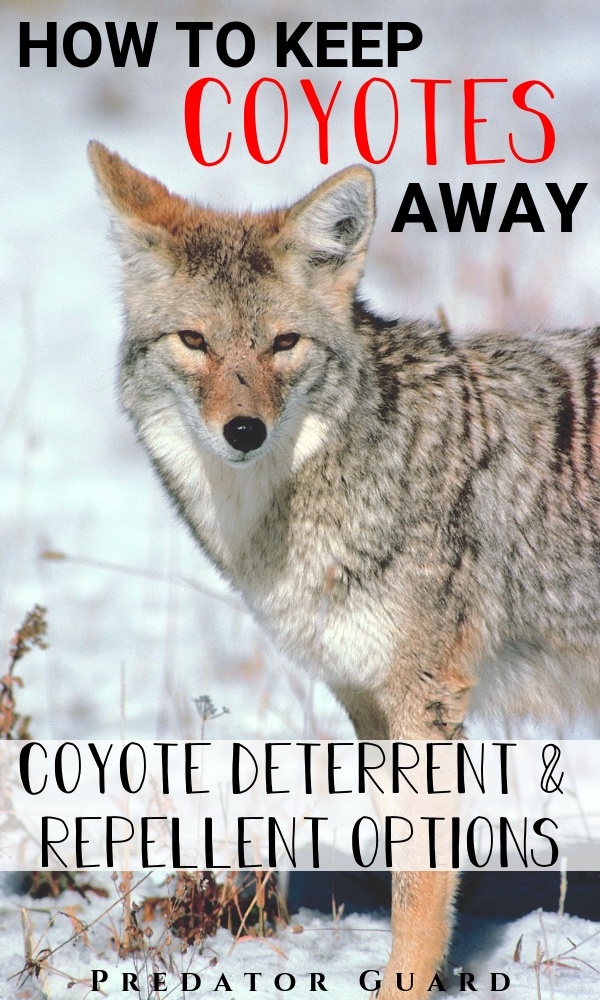 With the decline of their biggest competitor, the wolf, along with the loss of habitat, the coyote population is spreading throughout the United States.

Whether you raise livestock or not, it can be worrisome to spot a coyote on your property. Unfortunately, it's becoming more and more common, even in suburban areas and cities.

If you see a coyote, there's no reason to panic. There are ways to deter them from frequenting your yard.

As with any other animal, it starts with recognizing and understanding why they're coming to your area in the first place.

Typically they're in search of food or water. This is bad news for anyone with backyard chickens, or any other pet that goes outdoors, dogs included. But make no mistake about it! Any homeowner can find coyotes on their property, even if you have no pets.

In fact, coyotes are not picky eaters. They prefer eating meat, but they're not opposed to eating plants. According to to LiveScience,

"They are typically thought to be only meat eaters, but they are actually omnivores — they eat meat and vegetation. When they aren't snacking on bigger prey, they will eat snakes, insects, fruit and grass."

It's important to note that while coyotes are considered a pest animal due to their predation habits, they play an important role in most areas! Most notably, they keep the rodent population down.

Instead of hunting, capturing, or otherwise harming the coyotes in your area, we urge you to simply implement some of the tips below so they move on to other areas. 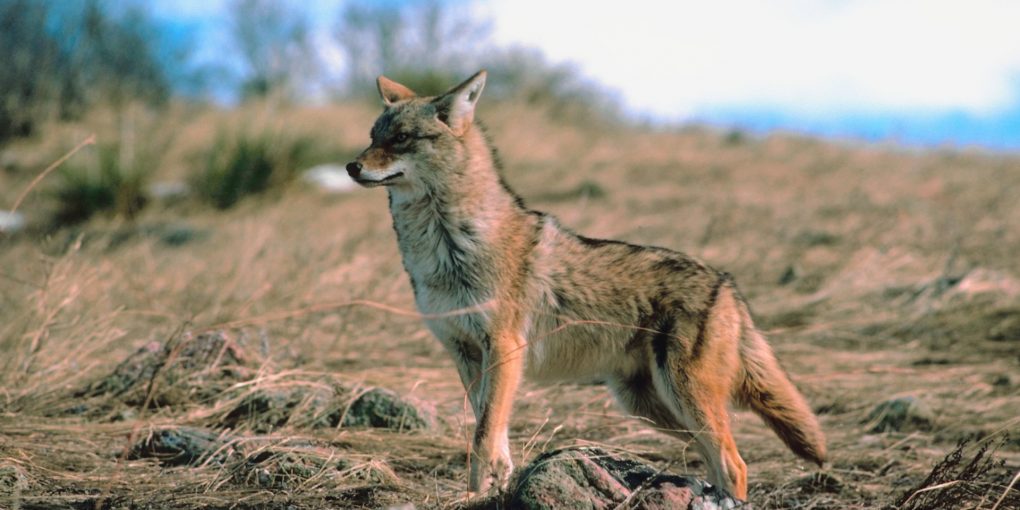 How To Identify Coyotes
It can be difficult to identify coyotes and differentiate them from dogs, wolves, and foxes, especially when you're only able to catch a glimpse of them as they run by. Here are a few tips to properly identify them in your area:
Physical Characteristics: 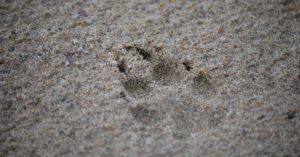 Coyote Tracks look very similar to domestic dog tracks, but the prints themselves are more narrow. Because they're so hard to identify, your best bet is to look at the line of travel instead of the individual prints. Coyote prints are almost always in a straight line, while dogs move all over the place, smelling and exploring. 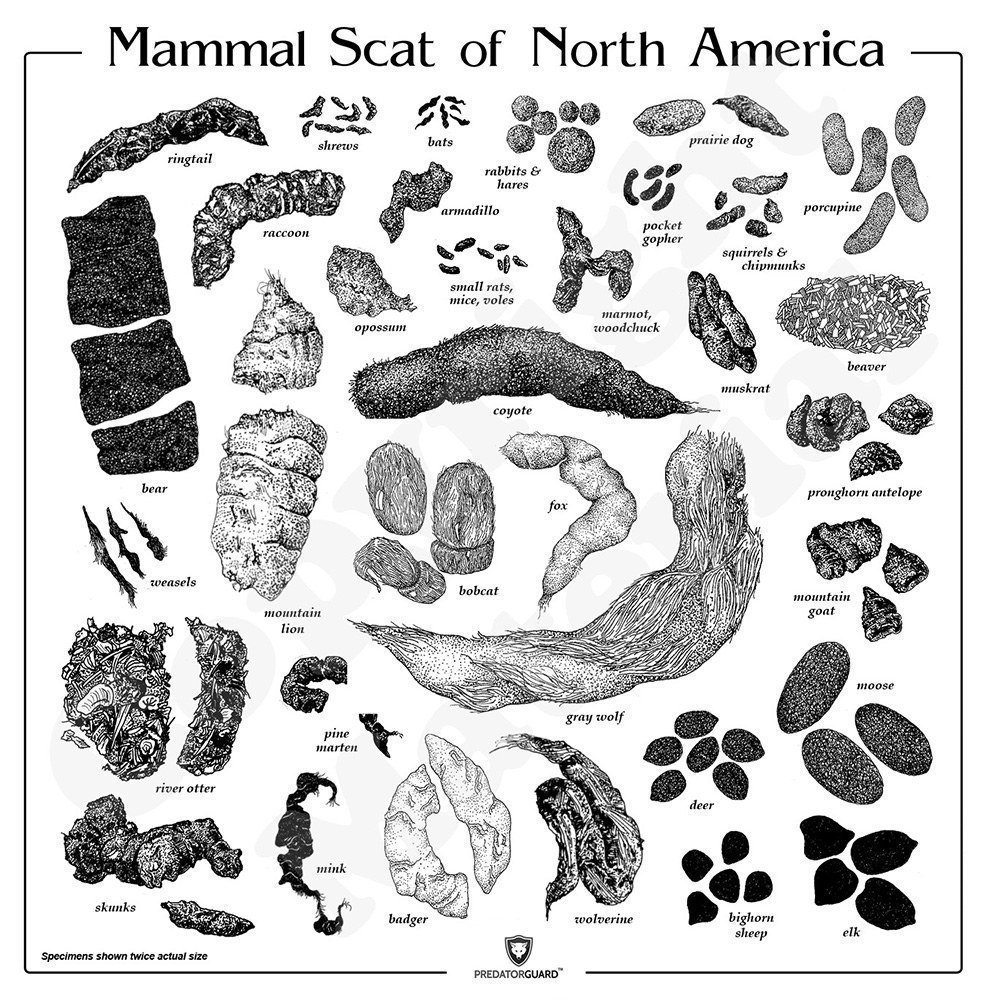 Coyote Scat is long and rope-like, and usually has hair and bones found throughout it. They use scat as a form of communication, so it's typically found out in the open.

You're also likely to hear coyotes howling, barking, and whining at night. They're typically very vocal creatures, and they communicate with each other frequently, though some packs have been observed to be more quiet than others, especially in urban areas.
Related: How To Identify Signs of Wild Animals
How To Keep Coyotes Away 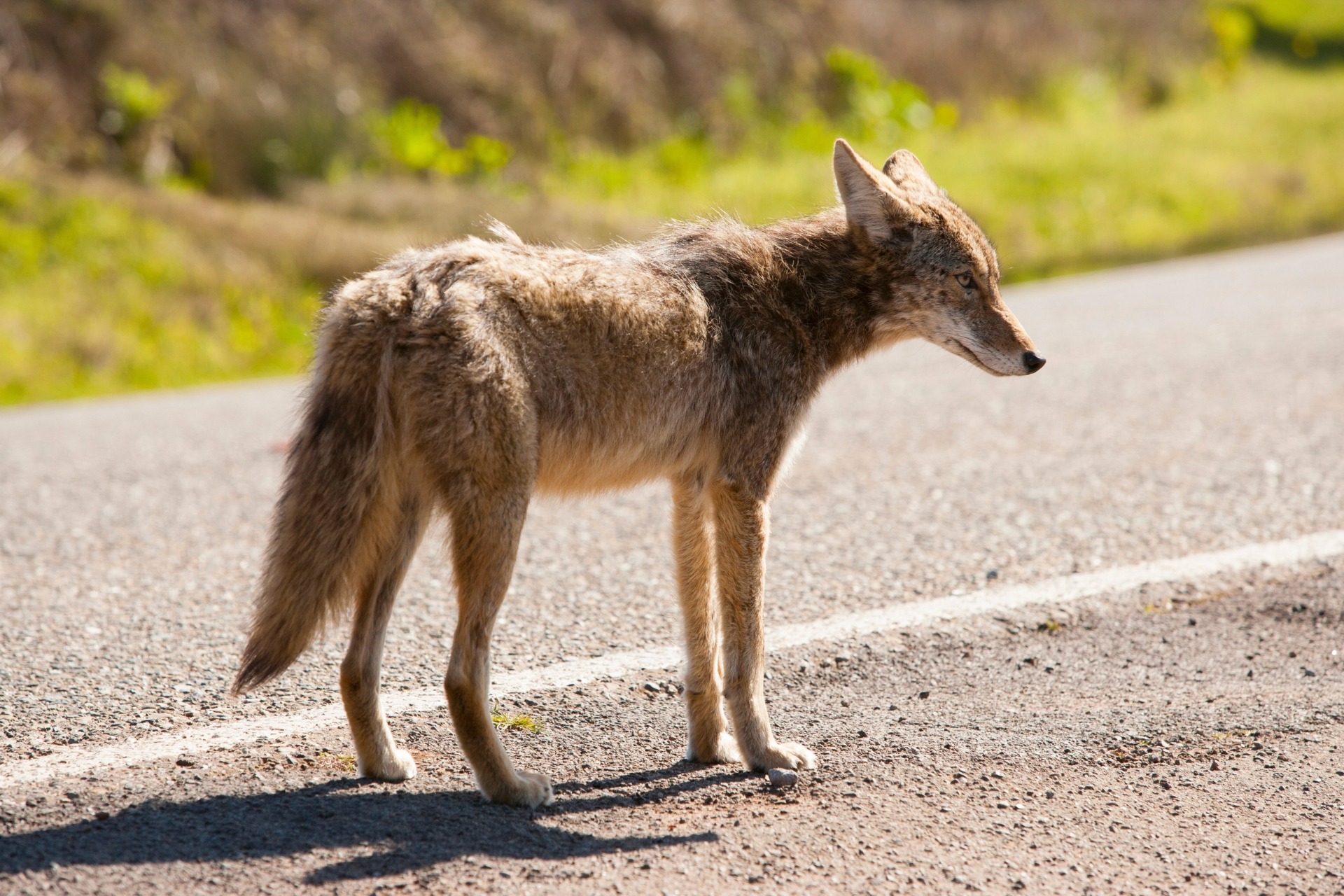 The first step when deterring any wild animals is to keep your yard clean. Remove all food and water sources so the coyotes aren't drawn to your property.

Your garbage cans should have an airtight lid, and you should be sure to bring all pet food indoors, especially at night.

This includes your pets, livestock animals, or even wild rabbits or rodents that may hang out in your yard. If there is an abundance of rabbits in your neighborhood, it may be worthwhile to take the steps necessary to keep them away from your home.

Coyotes may also stroll through your property if you don't have adequate fencing installed, though they're not likely to stay long unless there is food, shelter, or water sources nearby.


You should always remove anything that attracts pest and predator animals to your property, such as:

Fencing is the best way to keep your pets in, and coyotes out. Coyotes can jump high, and will dig as well, so fencing should be at least 6 feet tall, and buried a few inches into the ground.

Chain link fences can work, but the more private the fencing, the better. Some people also opt for electric fencing. 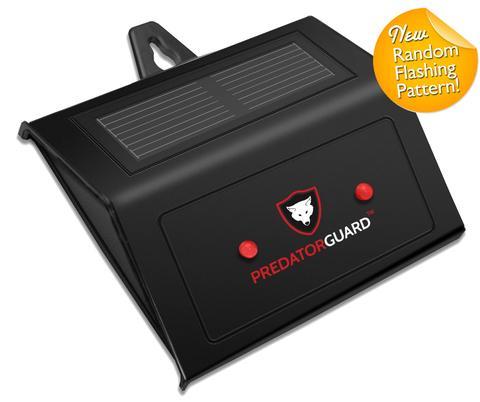 These solar LED deterrent lights work well to scare coyotes (and other nocturnal predators and pest animals) away from your property.

The coyotes will mistake the twin LED lights for the flickering eyes of another unknown predator, which will send them running! They're used all over the world, including Mongolia, where farmers successfully protect their goats from snow leopards. 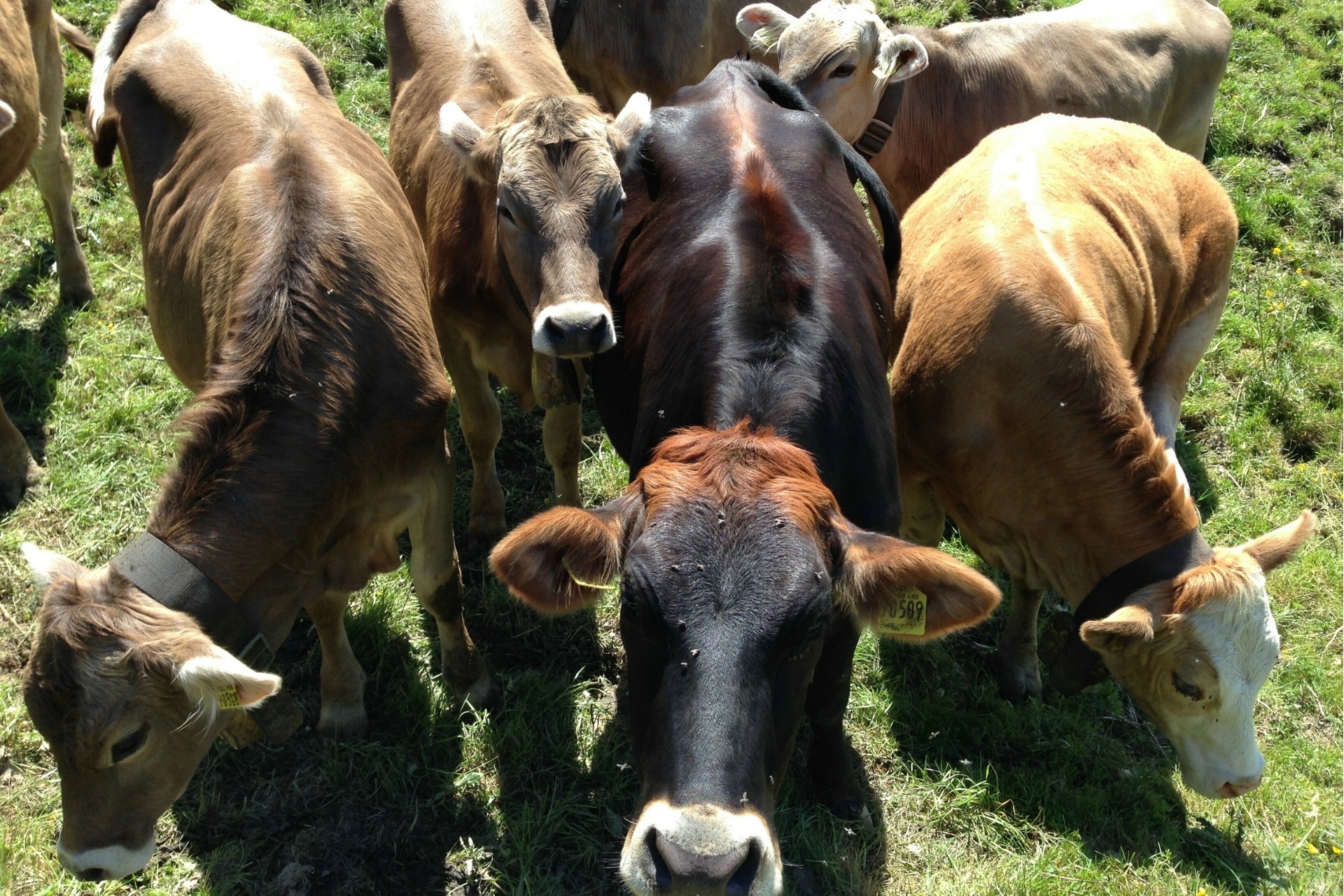 Keep All Livestock and Pets Locked up (Especially at Night)

Coyotes are most likely to hunt during the nighttime, but you may spot them during the day as well. In fact, someone was attacked by a coyote in the middle of the day in my town just a few months ago. It's uncommon, but it does happen.

However, you should worry about nightfall much more than a daytime attack. When you let your pets out to use the bathroom during the night, you'll want to keep an eye on them, or make sure they're in an enclosed space. It's also smart to limit the amount of time they spend outside unsupervised.

For small livestock animals, such as chickens, you absolutely should lock them up in their coop at night. Click here to learn more about protecting your backyard chickens from predators.

Livestock guardian animals are placed on properties to run off potential predators. The most common guardian animals include llamas, donkeys, and dogs. When protecting your livestock from coyotes, a donkey would be your best bet.

Donkeys are extremely aggressive towards coyotes and foxes, and will not hesitate to attack them and run them off of your property. Their presence alone should cut down on coyote sightings significantly.

Coyotes will take advantage of vulnerable animals whenever possible. This includes a livestock animal that's in labor or has recently given birth, sick pets, or injured animals. Even pets that are left out in the open with little protection are vulnerable to a quick and easy attack.

You should be sure to keep animals in these conditions somewhere safe, so coyotes aren't tempted to make an easy meal out of them. 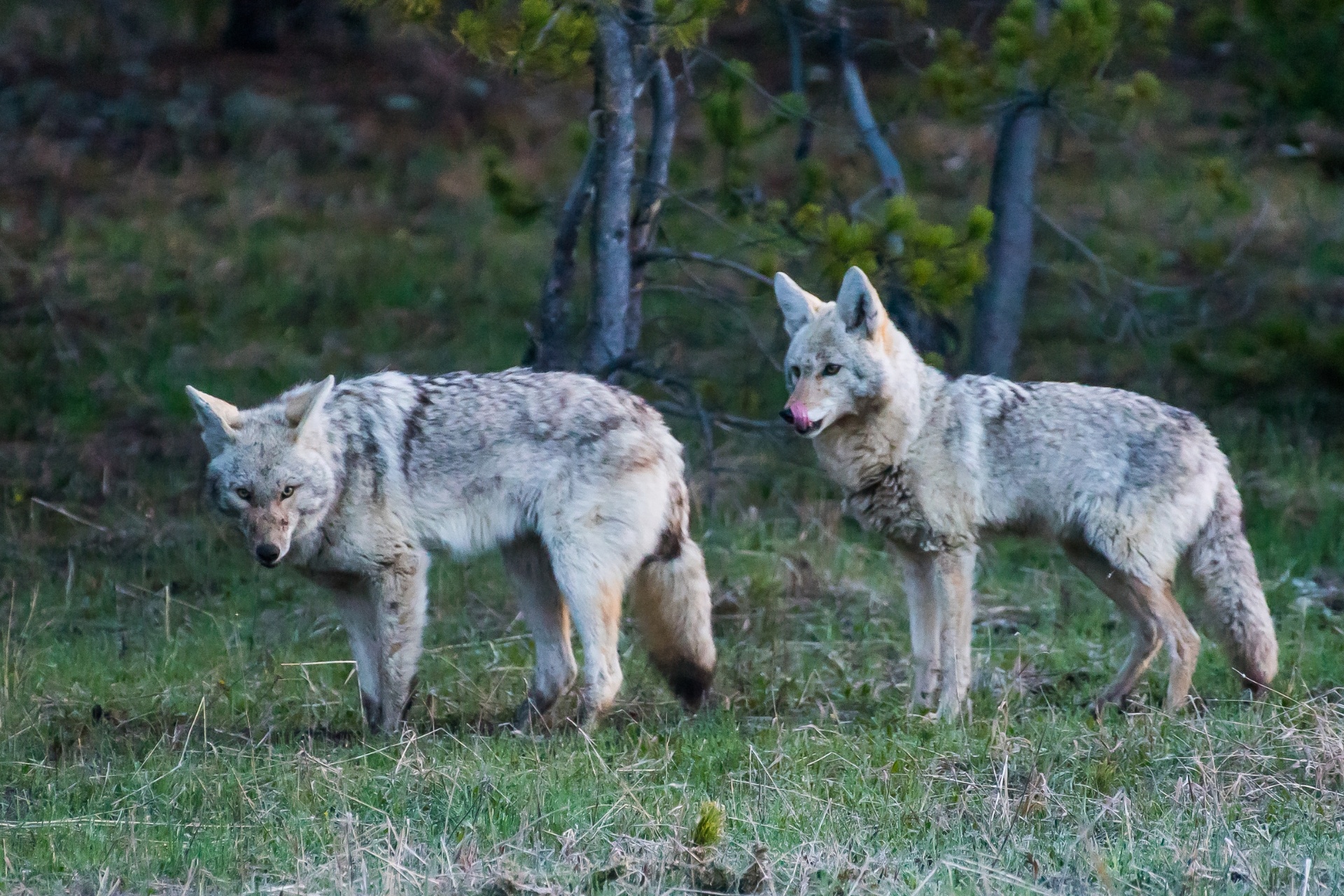 Does wolf urine repel coyotes?
Yes, it can. However, it's been found to be far more effective on female coyotes than males. It's also less effective on males who have no prior experience with wolves. If they don't know or recognize the scent, it's not always perceived as a threat.

Females are more likely to avoid wolf urine when they're denning, as everything can be seen as a threat to their pups.

Are coyotes afraid of humans?
In short, some are, some aren't. It honestly depends on the area you live in, and how well adjusted the coyotes are to living around humans. In some places, you may be able to turn on your porch light and scare nearby coyotes away, and in other places, this may do nothing to startle them at all.

You should always be cautious when approaching or being approached by a coyote. Many attacks on humans occur when someone is saving their pet, or when the coyote feels threatened. It's best to avoid them when possible. Don't count on a coyote running off scared simply by approaching them.

Do coyotes have rabies?
Coyotes can carry rabies, yes. Technically, any warm-blooded animal can contract rabies. According to the Humane Society, "Their close kinship to dogs places coyotes at greater risk where there are populations of unvaccinated domestic dogs. Recent advances in rabies control using oral bait to immunize wild animals ..without having to capture them have made controlling the spread of rabies in coyotes much more effective."

Do you have coyotes in your area? What's worked for you? Let us know in the comments below, we'd love to hear from you!