How to get rid of Moles in the Garden Humanely

gardening moles
Check out these humane methods for getting rid of moles in your garden or yard, as well as how to determine if you're dealing with gophers or moles. 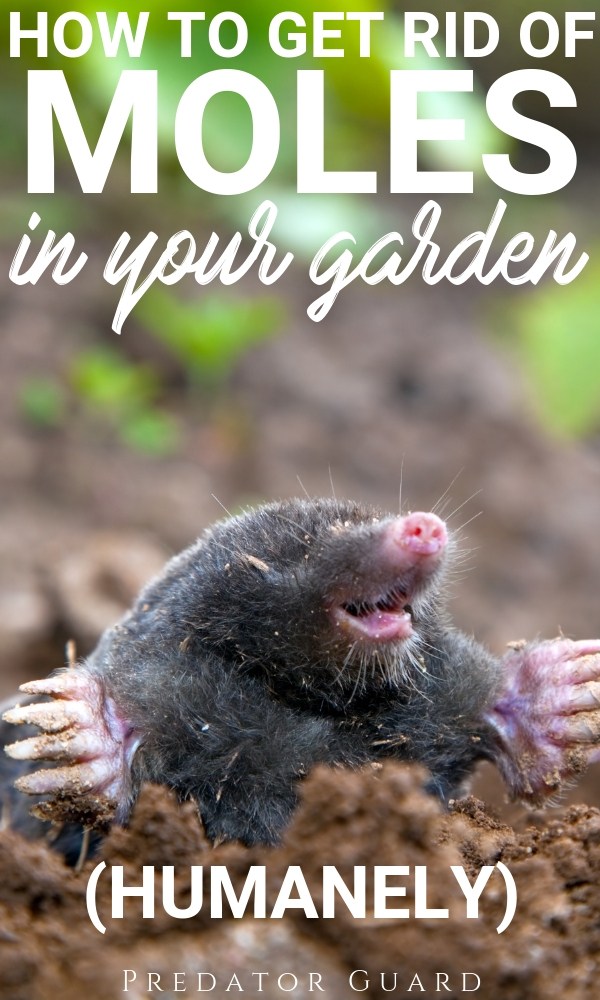 While moles are not interested in eating your plants, they can damage them by creating air pockets around the roots. They can also cause extensive damage to your lawn and yard, by - you guessed it - burrowing holes.

Many people are surprised to find out that moles are not rodents. They're insectivores, more closely related to bats. Very rarely do they feed on vegetation. Instead, they dine almost exclusively on earthworms, and occasionally centipedes, millipedes, snails, and slugs.

They can dig up to 18 feet in one hour, and though they can't see very well, they do have a great sense of smell that helps them find food. They spend almost all of their lives underground, making it highly unlikely that you'll ever actually spot a mole in your yard.

Identifying Moles in Your Garden or Yard
The damage left from moles is often confused with other pest animals, such as gophers, ground squirrels, voles, and even rats.

What makes it even more difficult to identify that moles are indeed what you're dealing with, is the fact that you'll likely never see the animal at all. More often than not, you'll see only the damage left behind.

The most common signs of moles include mounds and raised ridges, particularly along the edges of walkways, foundations, and driveways, where the soil tends to be moister. This is usually where the most grubs and worms can be found.

There are three main differences between gophers and moles.

1. Moles eat insects, while gophers are strict vegetarians. If your plants are being eaten, you're dealing with a gopher, not a mole.

2. The presence of dirt "clods," or big clumps of soil point towards moles. These clods will be present when there are moles in your yard. Gophers do not leave behind clods.

3. Gophers also do not dig surface tunnels like moles do. They dig their dens and tunnels deep underground, usually about 6 feet under the surface, emerging to feed. 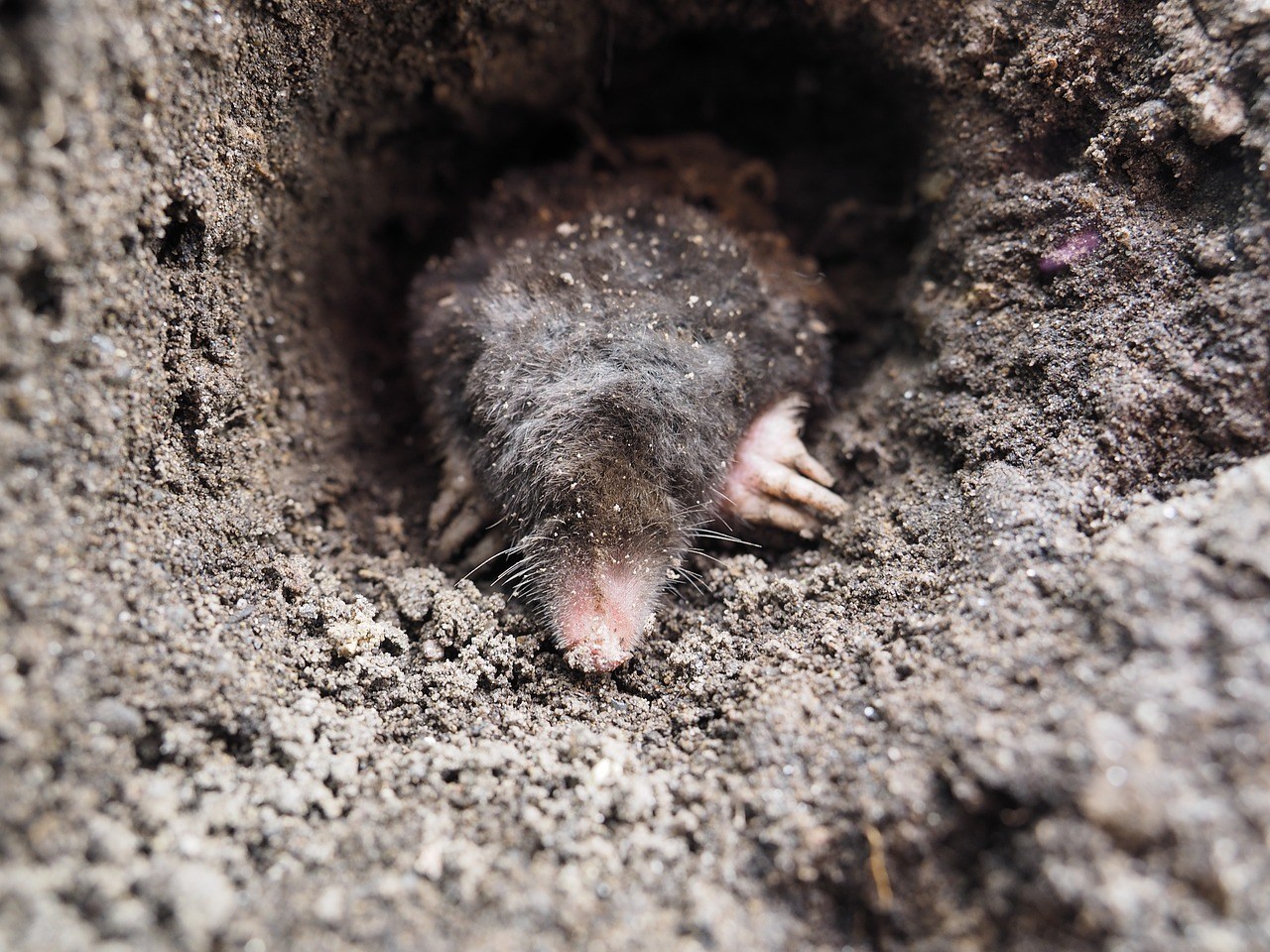 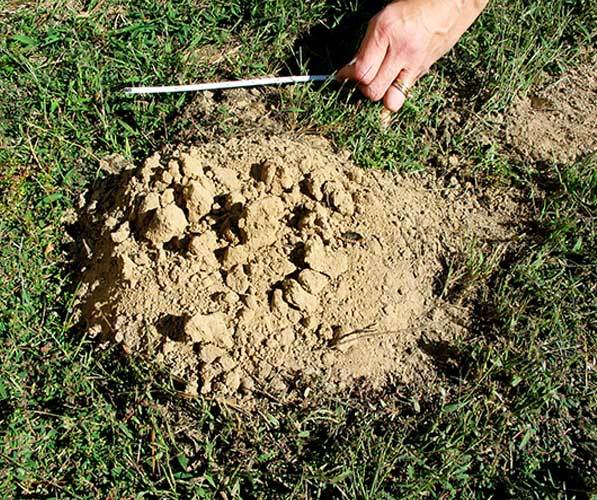 How to get rid of Moles in the Garden (Humanely)
Killing or otherwise harming moles in an attempt to get rid of them is not recommended. In fact, according to hartley-botanic.com, moles can actually be beneficial to gardeners.

Of course, the decision to get rid of them is completely up to you, and also understandable depending on the severity of the damage your yard is facing. Regardless, moles have their place, and poisons and traps can be detrimental to your local ecosystem. That's why we're focusing entirely on humane methods of getting rid of moles in your garden.


Rid Your Yard of Grubs

If you garden, you don't want to get rid of the earthworms, but you can at least try ridding your yard of grubs to cut back on the food supply for moles.

We recommend applying beneficial nematodes to your yard. They're a wonderful organic pest control option that doesn't affect anything beyond the grubs. Humans, pets, wildlife, and even earthworms are safe!

Planting marigolds, daffodils, or alliums in your yard is a wonderful, humane method of getting rid of moles. It doesn't harm them or any other animals in the area. It simply encourages the moles to move on, and deters them from returning since they dislike them so much.

Some people suggest planting "mole plant" or castor beans as a mole deterrent as well, but it should be noted that these are considered poisonous and should be avoided. We'd stick to marigolds and daffodils.

Marigolds in particular are a strong choice, since the more fragrant varieties are known for repelling deer and rabbits as well!


"Dry Out" Your Yard Just a Little Bit

Since moles and the insects they dine on thrive in moist, shady soil, you might consider drying it out just a bit. Not enough to ruin your garden, but enough to have an impact on the grub and earthworm population.

It's as simple as watering the affected area a little less! If it's a super shady spot, try allowing more sunlight in by trimming the bushes and branches in the way.

There are quite a few solar powered sonic spikes available. The idea is simple: You stick the stakes into your yard, and they emit ultrasonic vibrations that scare the moles away. The reviews are mixed, but it's worth a shot, especially in conjunction with other methods.

Catching live moles and releasing them is no easy task. It's arguably one of the harder animals to catch, actually, since they usually don't come to the surface.

A quick Youtube search will show different methods, and you'll quickly realize it's different than your usual catch-and-release trap setup.

You'll likely have to try these other methods to drive the moles up to the surface, keeping a close eye on your yard. Once you see them making their way up, you have to act quickly.


Does Castor Oil for Repelling Moles?

A common home remedy for deterring moles is creating a solution of castor oil and water, sometimes with a little bit of cayenne. Castor oil will not harm any animals or your plants, but it has a strong, distinct smell that supposedly sends moles packing.

According to this expert, castor oil is not an effective solution. Furthermore, most people use this homemade concoction to kill moles, not to simply drive them away.
Please note that moth balls should also be avoided, as they're highly toxic.


Have moles been digging up your yard? Did we help you determine if your garden is plagued by moles or gophers? Let us know how your experience has been in the comments below!
Tweet