8 Common Goat Predators - And What You Can Do About Them

coyotes foxes wolves bobcats mountain-lions bears eagles dogs
Identify the top 8 goat predators, and learn what you can do to protect them from attacks. 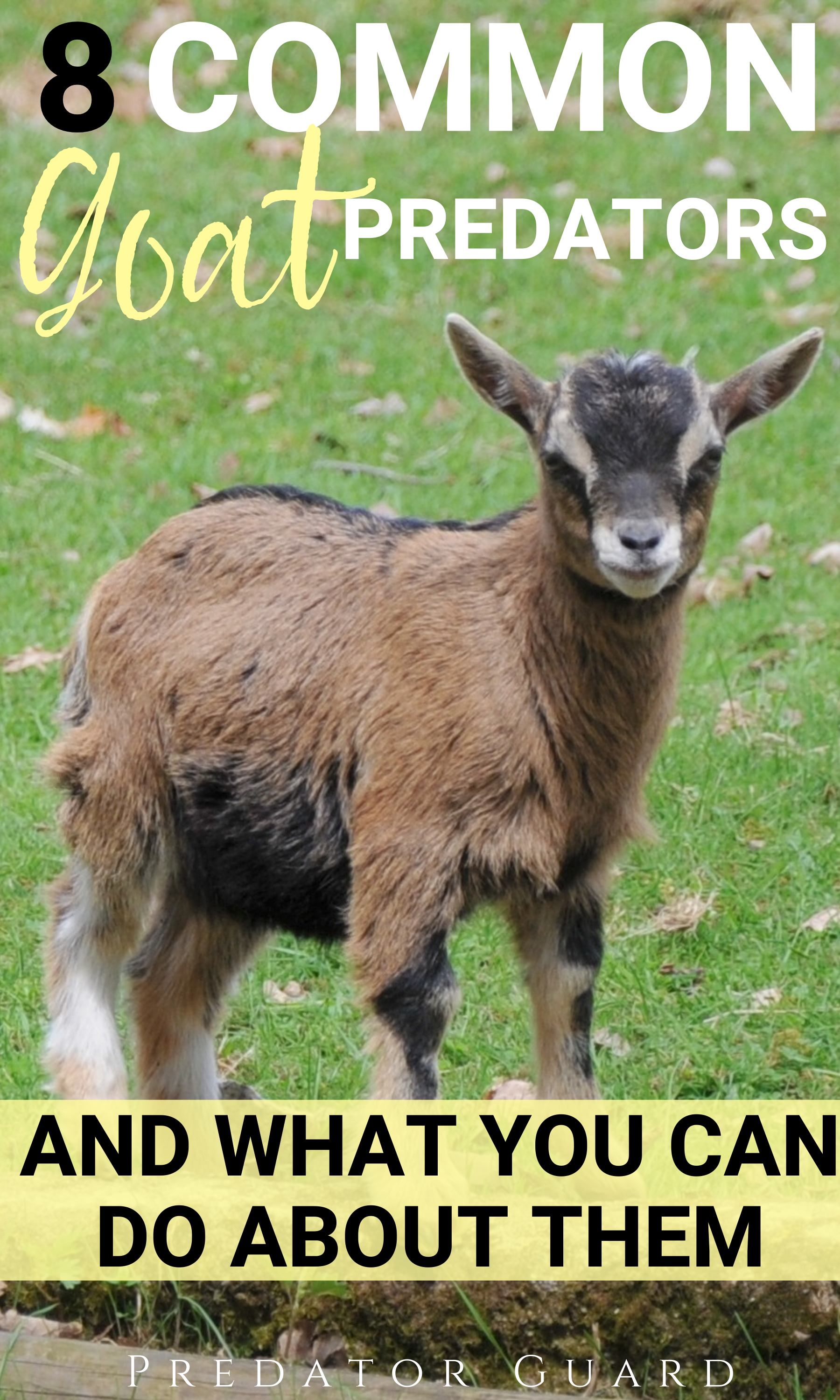 Whether you're raising goats for milk, meat, or fun, you probably want to ensure that your herd is protected from predator attacks.

If you're new to the world of raising goats, it may seem overwhelming at first. After all, everyone's shelter and fencing setup is different! It's difficult to know exactly what specifications will ensure that your goats are safe from the elements and other animals.

Not to worry! It's not nearly as difficult as it seems at first.

Knowing what kind of predators you're dealing with is the first step to protecting your animals.

From there, it's simply a matter of setting up fencing and shelter, and understanding the basics of how goat predators operate. When and how do they attack? How can you create a setup that keeps your herd safe?

Coyotes are one of the top predator animals you'll want to learn to keep away when raising goats, or any smaller livestock animal for that matter.

Make no mistake about it, even if you're raising goats in an urban area, coyotes very well still may pose a threat. Coyote populations are spreading every year, as their top competitor (the wolf) dwindles, and urban areas continue to take over.

Foxes usually prey on chickens and other small animals, and pose the biggest threat to your goats during kidding season. Typically foxes will go after the kids themselves, but you should take special care to keep the new mom safe as well, since she's in a weakened, vulnerable state.

As far as full grown, adult goats are concerned, smaller breeds are far more susceptible to being attacked by foxes than their larger counterparts.

It should also be noted that foxes will kill for sport, which mean even in an area with plenty of natural food sources available, your goats are still at risk.

Though the number of wolves in the US is declining, they still pose a threat to your goats, particularly if you live in a state where they're legally protected.

Wolves prefer to hunt larger animals, but they'll turn to your goats if they're easy to get to, or if other prey in the area becomes scarce.

Bobcats can be a big problem for some livestock owners, and you should certainly take protecting your goats from these predators seriously.

They're nocturnal, mostly hunting throughout the night, dusk and dawn, so you shouldn't have to worry about them during the day as much. However, if they're hungry enough, bobcats have been known to hunt during the day on occasion.

Mountain lions are considerably larger than bobcats, and will take down goats with ease. In fact, if a mountain lion is hungry and finds a way to get to your goats, they're capable of taking an entire herd out.

They're solitary animals, usually traveling alone except for mating season. The biggest problem with mountain lions is the fact that they can be spotted during the day or night. However, they typically hunt during dusk and dawn, when deer are most active.

It goes without saying that bears are large and can take out your herd, no problem. And once an attack begins, there's little you can do to stop it.

They usually kill by biting the neck and slapping their prey with their massive front paws. When it comes to smaller livestock, like goats, they may be consumed almost entirely, except for the rumen, larger bones, and some skin.

Perhaps the most astonishing predator you should guard your goats from is the majestic eagle. With a wingspan of up to 8 feet, goat kids (and even occasionally full-grown goats) may be taken away by an eagle in almost the blink of an eye.

Similar to foxes, you'll need to guard kids and smaller breeds of goats, such as the nigerian dwarf goat, more heavily than larger breeds.

Surprisingly, stray dogs attack goats pretty frequently. There are approximately 3.9 million stray dogs in the US. And, of course, your goats could fall prey to aggressive neighborhood dogs that roam freely.

Related: How To Identify Signs of Wild Animals

How To Protect Your Goats From Predators

Having clutter or trash on your property is inviting for wildlife. Piles of brush make a great hiding spot for a predator looking to scope out the situation before attacking, and garbage attracts hungry animals. Cleaning your yard should be the first thing you do when deterring predators and pest animals.


Install and Secure Your Fencing

Fencing should always be top priority when it comes to protecting any livestock animals. Goats in particular need an enclosure to keep them in, as well as keep predators out. They're escape artists, that's for sure!

Thankfully, creating a predator proof goat pen isn't difficult. Electric fencing is a popular choice for protecting goats from predators, with the bottom 2 strands located 6 and 14 inches above the ground.

Additionally, it's most effective when placed on the exterior of the main fence, offset by about 18 inches. This deters predators with the ability to climb as well!


Provide Your Goats with Shelter at Night

Goats need access to shelter to hide from rain, and to sleep at night. Closing your goats up in a barn or shed is the best way to protect them from nocturnal predators, however, many people successfully raise goats with simple 3-sided shelters.


Llamas, donkeys (preferably female), alpacas, and dogs are all good choices for a livestock guardian animal, given that they've built a bond with your goats. This is why it's recommended to raise your guardian animal alongside the herd they're protecting from a young age.


It makes sense, doesn't it? Why would they go out of their way to protect animals they don't feel connected to? It goes beyond simply creating a bond between these animals; the livestock guardian animal needs to feel like they belong with the herd.


Check out some success stories below:


Clean up After Kiddings

Cleaning up after kiddings is vital to keeping predators away from your goats. Hungry animals will be able to smell the opportunity and attack when their guard is down and they're weak from labor.

Let the doe eat the afterbirth, or bury it quickly to hide the scent. You might also take into consideration the time of year when breeding your goats. For example, coyotes are most active in the Summer months, shortly after their own litters are born.

Goat cycles vary from breed to breed, but most people who raise goats like to time the kidding season with a time where predators are less-active.

You should also strive to provide adequate shelter for your does and kids during labor and shortly after.  This is especially important if your doe is going to labor during the colder months, as it's more likely the kids will survive.


Most predator animals are opportunistic, and will strike when your guard is down, or when an easy kill presents itself. It goes without saying that it's easier to successfully attack young, sick, injured, and old goats over young, healthy goats.


Because of this, extra measures should be taken to protect the weaker animals in your herd.


What animal will protect goats?

Llamas, donkeys, dogs, and alpacas are all good options for guardian animals for your goats. Just remember, it's best to add the guardian animal to the herd at a young age, so they have time to bond with your goats. The success of this tactic is also heavily dependent upon the specific animals' disposition, which can make the whole thing sort of hit or miss.

How do I protect my goats from predators?

In short, you can follow these steps to protect your goats from predators:

3. Provide your Goats with Shelter

6. Clean up After Kiddings

Absolutely! Like many predators, bobcats are opportunistic and will go for any easy kill. That's why it's so important to take the steps necessary to protect your goats from falling prey to attacks.

If it's too difficult to get to your goats, bobcats (and many other animals) will likely move on in search of another food source.

Can a fox kill a goat?

Yes, especially young, injured, or otherwise weak goats. A hungry fox may even go after adult goats on occasion, though it's much more likely they'll attack during kidding season.

How do you protect your goats? Let us know in the comments below!

If you liked this post, don't forget to pin it for later: